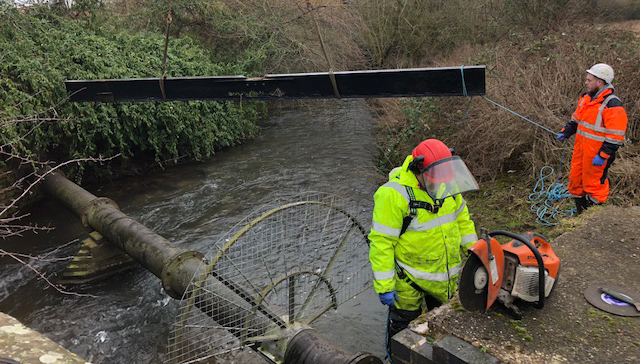 Across the Severn Trent Water area there are over 100 sites where sewage pipes run across bridges scaling rivers or other obstacles. Ensuring the condition of these pipes is a health and safety priority, along with protection from potential un-authorised access by members of the general public, forming part of essential maintenance.

A number of additional “Emergency” sites which required urgent corrective works were identified, one of these was Church Warsop.

The pipe bridge at Church Warsop was identified as having a support structure which was partially impeding the water flow during periods of high rainfall, this obstruction caused debris from upstream to become ”wedged” against and under the structure.

On inspection it was clearly observed that the support beam under the pipe had been a temporary support put in place whilst the mid channel brick support pier had been originally installed. This support had been left in place and had deteriorated in condition e.g. excessive corrosion and generally weakened over time and it was considered that it should be removed. 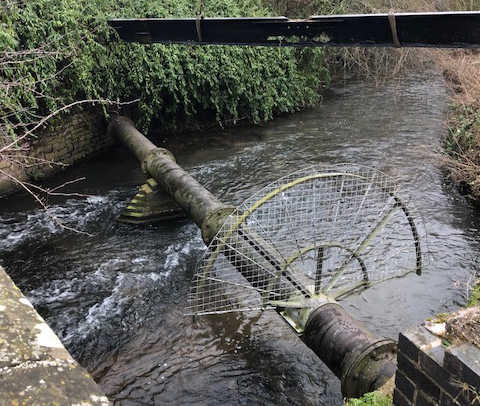 A site meeting was held with both STW and the Environment Agency (EA) where it was stated that the EA visited this site on average once per week to remove the excessive lodged debris from around and on the structure to ensure that the river could flow freely when in a flooding condition. Agreement was made to have the beam structure removed with its accompanying pipe fan.

The emergency works were planned well ahead and all stakeholders were consulted during the planning process to assure completeness and full agreement. The works foreman attended the site before the works commenced to confirm the Risk Assessment & Method Statements (RAMS) were appropriate and fulfilled the level of detail required.

The works on the planned day went without any incident whatsoever and due to the detailed planning, completed well within the works planned time. 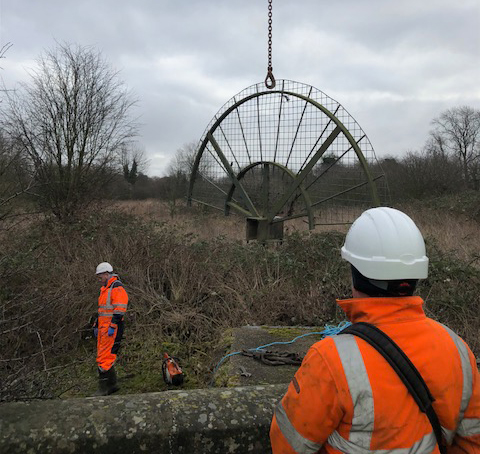 The simple step of removing the beam has bettered the flow of the river. No longer is there a build up of the water volume on the upstream side. The overall effect has meant that water quality has improved and environmentally the area is very much cleaner. The Environment Agency still check the site to ensure the site is clear and free flowing but the regular need to remove debris from this site is no longer required.

" Kier demonstrated an ability to react to new work with minimal fuss. The work was undertaken safely and efficiently with little disruption to local traffic. Result is that the EA will not need to remove repeated localised blockages at the pipe bridge that create flood risks. "