A unique and distinctive regeneration project promoting Gloucester’s unparalleled heritage from archaeology to aviation. The Hub is a highly symbolic part of the rejuvenation of the main entry point into the city, a gateway used in Roman times which is now served by both road and rail. 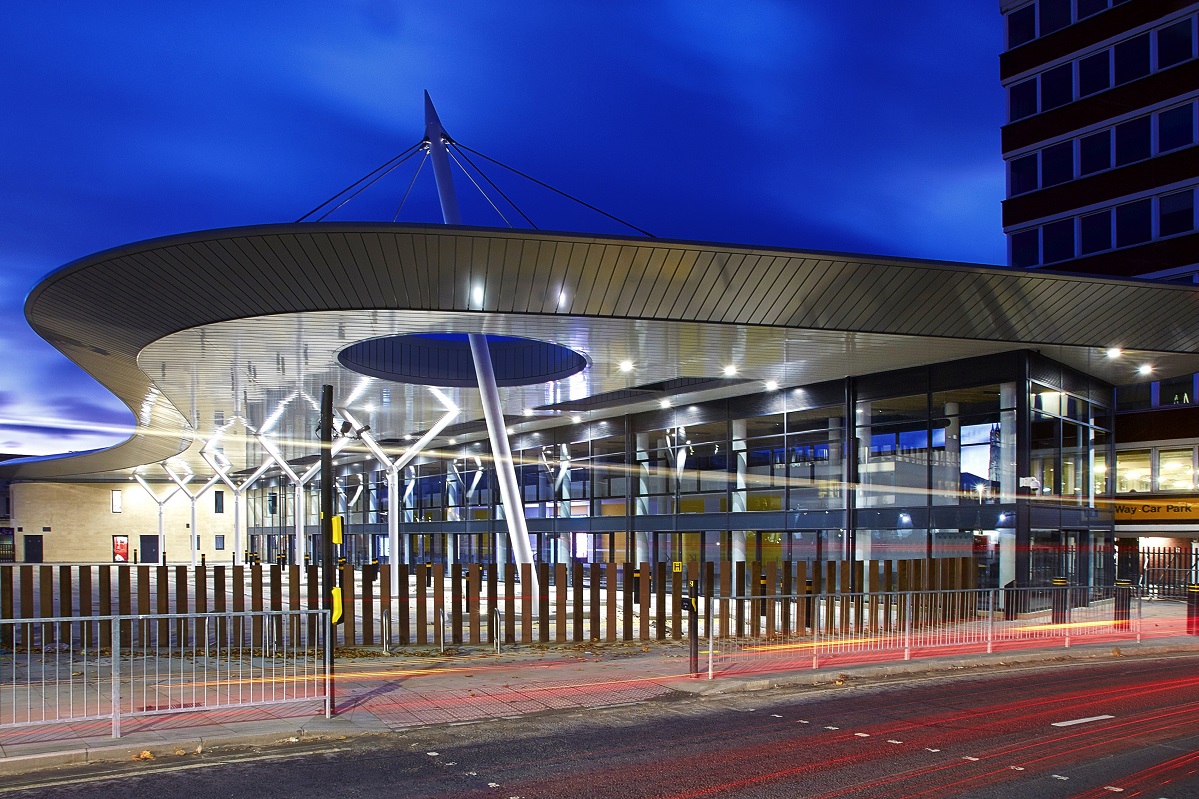 The existing 1960’s bus station was a shabby, rundown inadequate structure, an eyesore in the city centre. Its replacement and the redevelopment of the surrounding area was eagerly awaited by Gloucestershire people who had been disillusioned and frustrated for years as consecutive developers considered the project unviable.

Constructed on a live site, in a complex urban historic environment within a restricted city centre, specific challenges surrounding the project involved the council acquiring the land themselves, then the demolition of an existing building. There were planning restrictions; extensive archaeological surveys; ground contamination; unexpected and complicated service diversions; highway changes and a challenging budget.

In addition, complex changes to the road system had to be reconfigured to improve traffic flows at a key junction opposite the railway station, adjacent to the site. 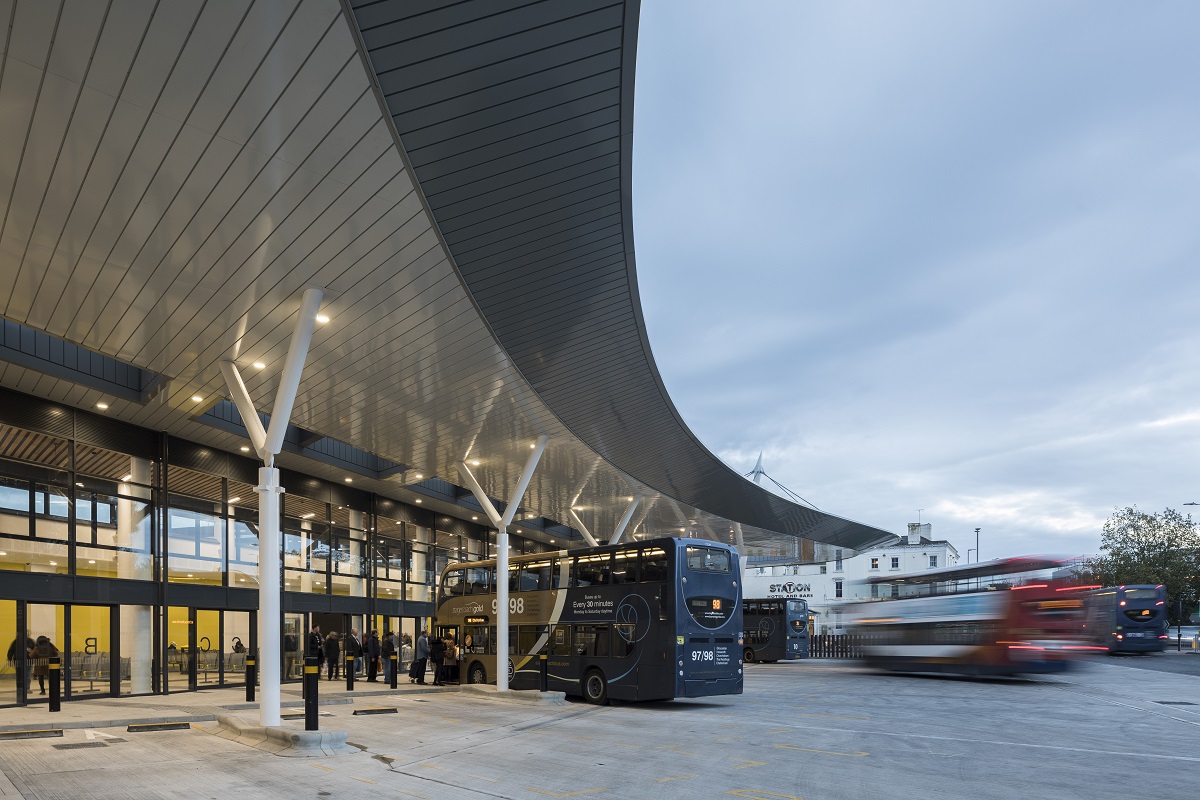 Kier worked collaboratively with the client, architect, subcontractors and end-users to produce a value-for-money, high-quality 21st-century landmark building, delivered on budget and to programme.

The innovative design of the roof was a complex engineering challenge: a 78-degree mast supports the canopy which required extensive temporary propping before the critical load transference onto permanent supporting bars took place. Propping removed, the deflection measured exactly as the engineers designed.

Reflecting Gloucester’s Roman heritage a colonnade of columns runs the length of the interior and a section of a 1900-year-old Roman wall discovered in the archaeological dig features as a public display.

Gloucester’s aviation heritage is celebrated in the dramatic concourse canopy which resembles an aircraft wing; punctuated at points, it allows light to flood into the interior. 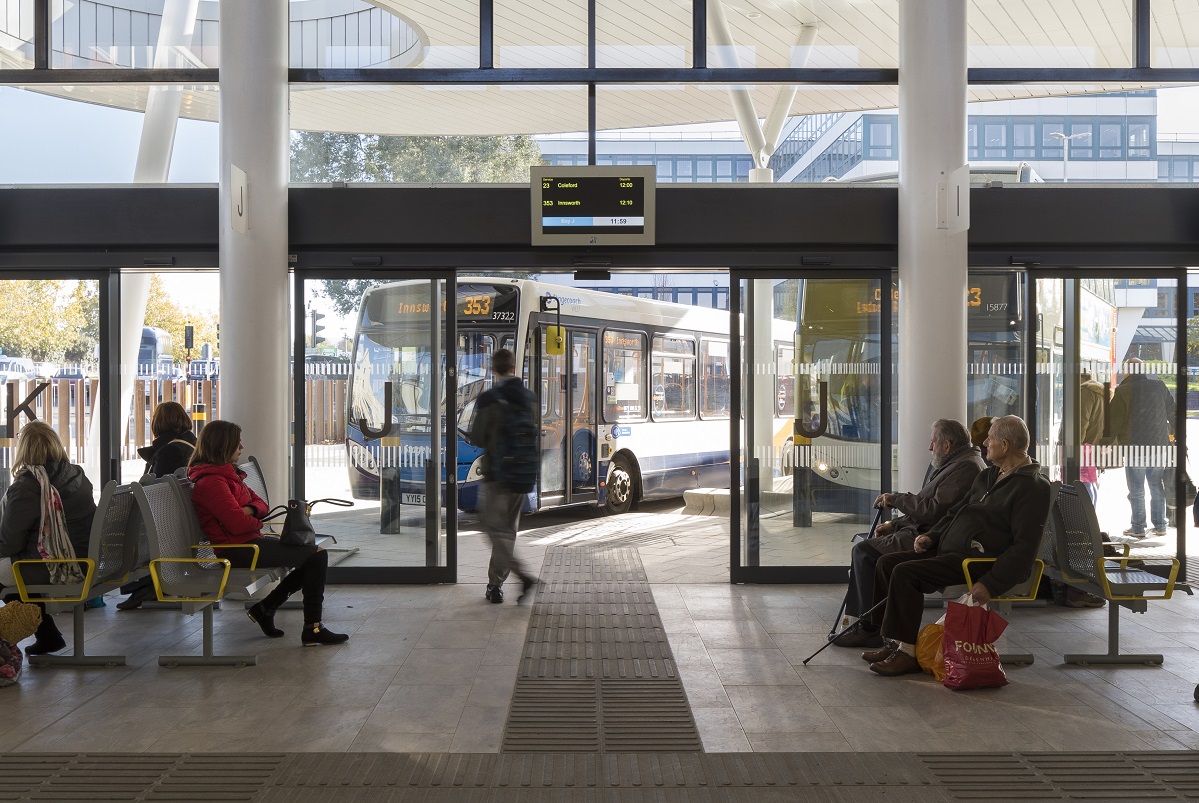 The building is a stunning interpretation of the brief which was to deliver an iconic yet affordable transport hub which pays homage to Gloucester’s history.

The occupiers Stagecoach, and passengers, have given the new hub an extremely enthusiastic reception. Public reaction is extremely positive, and the hub has itself become a tourist attraction.

The building’s sustainable features include photovoltaics which produce power with the excess sold back to the grid. Changes in the road system have improved traffic flow and created a proper link from the hospital to the city centre. And the project itself has become a catalyst for the wider regeneration of the area.

The 46-week build programme facilitated a local spend of £2.3m in labour and materials, engaging with 60 local trades-people, apprentices and trainees at the height of construction.

At the 2018 construction ‘Open Doors’ event, the hub was the most visited site outside London.

" We were really impressed with what Kier could offer and how they also want to have that local focus. So, it wasn’t about a business based somewhere on the other side of the galaxy, it was about those people relationships and the trust and that constant dialogue and communication: that’s only down to the people involved. "

Major Earthworks project to prepare for construction of UK’s first nuclear power station for a generation.

A unique and distinctive regeneration project promoting Gloucester’s unparalleled heritage from archaeology to aviation. The Hub is a highly symbolic part of the rejuvenation of the main entry point into the city, a gateway used in Roman times which is now served by both road and rail.

Kier worked as part of Team Van Ord (TVO) to improve the standard of protection provided to 39,741 properties in the towns and villages of Worle, Weston-Super-Mare, Kingston Seymour and Wick St Lawrence by improving the 3670m of earth bank tidal defences lining the Congresbury Yeo Estuary.

Kier worked as part of Team Van Ord (TVO) on The Steart Coastal Management Project which was the UK’s largest coastal management scheme, helping to protect homes and business from flooding due to climate change and rising sea levels.​

Kier used our marine expertise to undertake improvement works to St Mary’s Harbour on the Isles of Scilly, located within areas of national and international environmental and ecological protection.​

Setting up and running a project aimed at giving unemployed young people the opportunity to work on variety of projects at Kier North Tyneside, working with North Tyneside Council and Justice Prince ( a community interest company), and helping the young people learn new skills and grow in confidence.

Replacing eroded concrete along a 40m length of Loe Bar Outfall by spraying concrete on the front and top face of the outfall and around the inspection chamber. The works had to be completed by the end of October 2020.

The development of a CL:AIRE Materials Management Plan (MMP), enabled the use of soils, which would normally be classified as waste, from a local development site within flood banks on the Helston (River Cober) Flood Alleviation Scheme, Helston, West Cornwall.

A ‘Forever Home’ for a nomadic Primary School which originally operated from dilapidated portacabins and then moved to occupy converted offices with no playground. The new Academy is a spacious home to 67 pupils but allows for 420-student capacity as the new housing developments in the area become occupied.

Phase one of the Quayside regeneration master plan in Gloucester City Centre is a 3-storey multi-purpose building, including two GP surgeries to serve 18,000 people. It was constructed on the footprint of the original Quayside House, a 1960’s facility which had reached the end of its life.