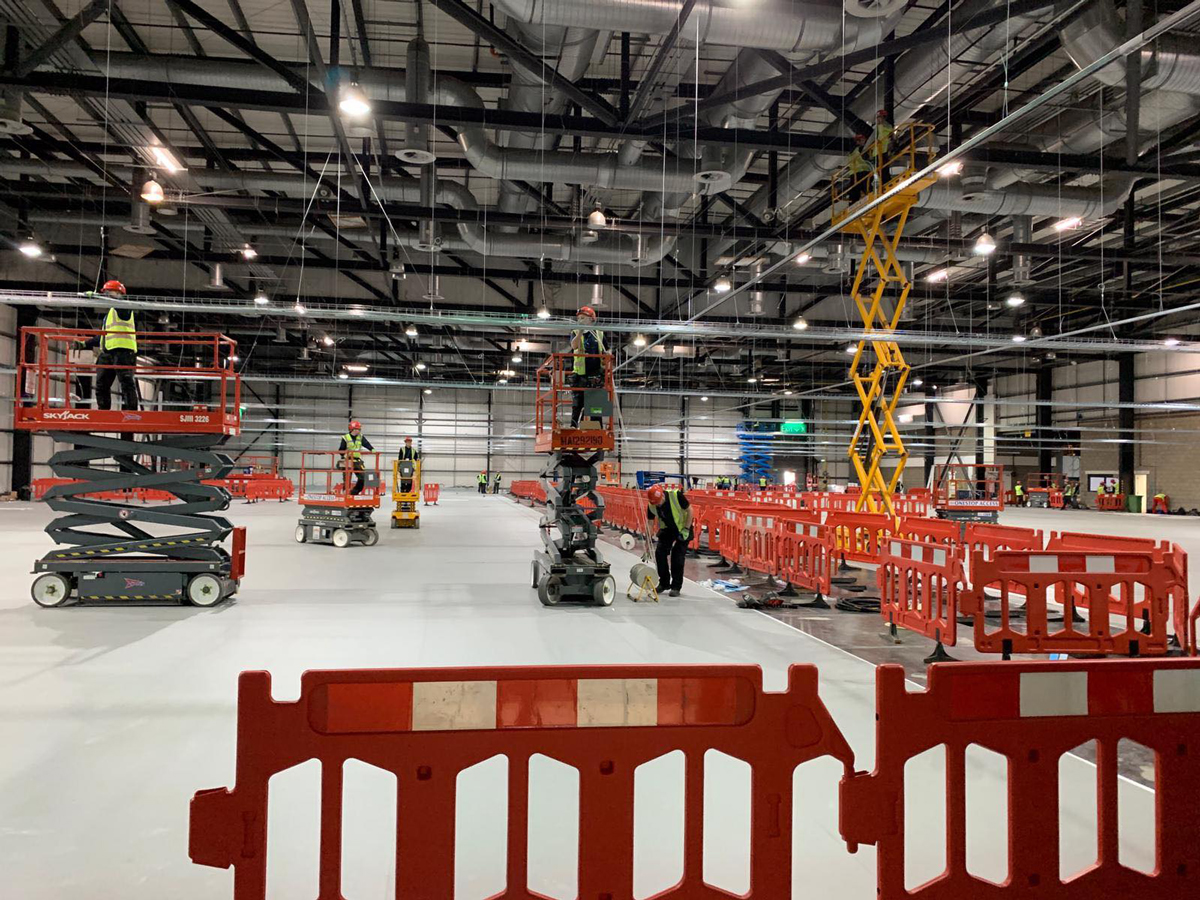 In response to the COVID-19 pandemic, the Scottish Government wanted to convert the Scottish Event Campus (SEC) in to a temporary hospital that would provide the NHS with additional capacity. This was of national importance and time critical, requiring an agile response that would also comply with all social distancing measures. 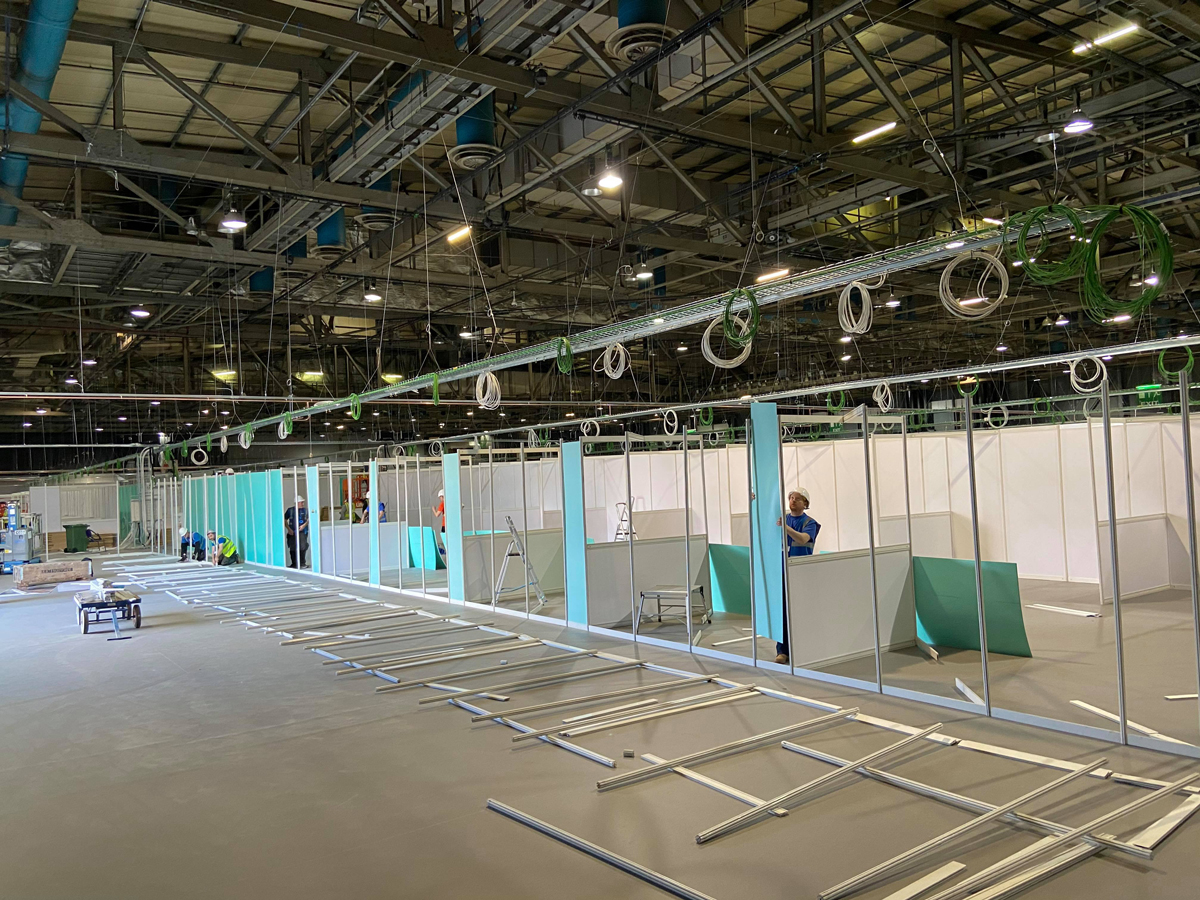 Appointed under Frameworks Scotland 2, Kier and three other contractors united and worked collaboratively with NHS National Services Scotland, Scottish Government, the British Army and others, to convert the events space in to a hospital that provided 1000 beds.

Following our appointment on the Friday, the weekend was spent planning, resourcing and briefing teams, with works starting the following Tuesday.

To ensure the programme remained on track, the programme was reviewed continually with more than usual project milestones included. With daily briefings, the collaborative approach meant decisions were made collectively and swiftly, problems were resolved together, and actions put in to practice immediately.

At the peak of construction, over 550 contractors were on site safely carrying out works. Over 23,000 square metres of flooring was laid, and 135,000 metres of cabling installed for lighting and power sockets.

BIM360 was utilised on the project which meant all aspects of construction could be assessed in real time, with any issues flagged via an app that would be resolved by the responsible contractor there and then, which minimised the need for any follow-up defects work. 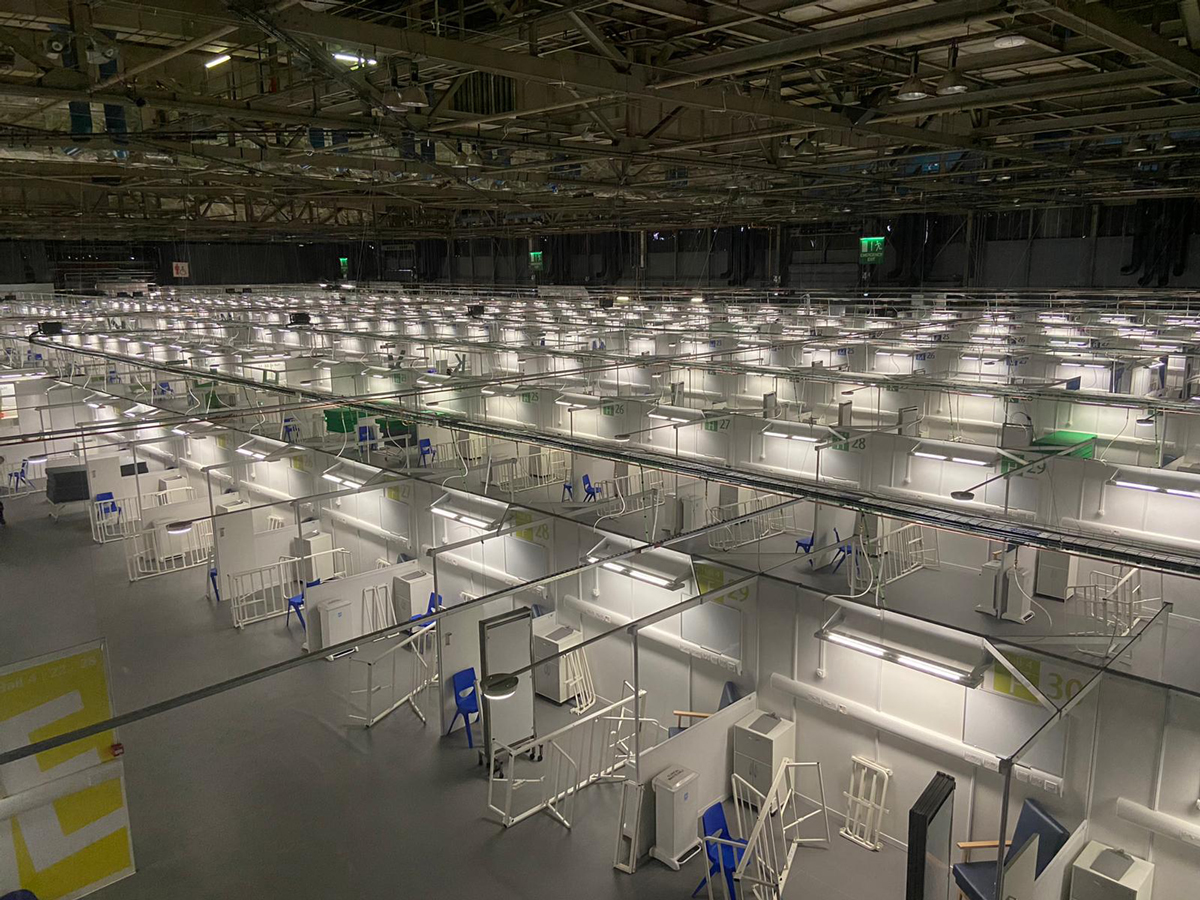 In just 20 days the SEC was converted in to a national facility catering for 1000 patients. Scottish Government always said they hoped it would not be used, but it was essential to have it ready in case it was.

NHS Louisa Jordan and the other temporary hospitals are also set to bring about longer-term changes, with the consideration of flexibility and repurposing central to the construction of new hospital buildings.

" It has taken just under three weeks to design, construct and mobilise NHS Louisa Jordan. This has only been possible thanks to all of our contractors working around the clock to make sure we are ready to support the NHS in Scotland. Because of your efforts, we now have a safe, effective and high-quality environment which stands ready for patients if required. On behalf of the entire NHS team, I would like to say a sincere and heartfelt thank you to Kier for their involvement and remarkable contribution to the delivery of our hospital. "

Fit-out of a new, purpose-built development in Barnsley for use by NHS Blood and Transplant as a specialist research, storage, and logistics facility for the wider NHS, replacing facilities in Sheffield and Leeds to ensure efficiencies and improve services.

Our North Middlesex University Hospital (NMUH) project was a £53.6 million re-development comprising of 5 separate projects including units for Strokes, HIV, Women’s & Children’s Services, retained estates, infrastructure and external works. We treated each unit as an individual project with its own project team.

Kier have been working in partnership with West London Mental Health NHS Trust since 2003.

Construction and fit-out of a concrete-framed, two-storey PET-MRI facility at the Royal Hallamshire Hospital in Sheffield, a joint project for the University of Sheffield and Sheffield Teaching Hospitals NHS Foundation Trust.

University Hospitals Birmingham NHS Foundation Trust appointed Kier through the P22 Framework to deliver a brand-new centre to Heartlands Hospital. The exciting project will bring world-class facilities and house a wide range of health services, caring for circa half-a-million patients each year.

Atherleigh Park has set the standard for the design of adult inpatient mental health accommodation, providing a healthy, therapeutic environment for residents that promotes their physical and mental wellbeing.

The Mitford Unit Adult Autism Unit provides high-quality accommodation for adults with autistic spectrum disorders in a calming, therapeutic and safe environment that has incorporated design best practice from around the world.

Converting the Bay Studios in Swansea in to a temporary hospital, providing facilities and delivering infrastructure for 1000 patients.

Our Great Ormond Street Hospital (GOSH) iMRI project involved the construction of a three-storey building, adjacent to their existing theatres in the centre of their site, for a new iMRI suite and rehabilitation gym. The new MRI scanner was integrated into the new operating theatre to create a seamless brain imaging process during surgeries.

The design and build of a £98m state-of-the-art facility using the latest technology to deliver outstanding services to NHS and private patients across Berkshire, Hampshire, and Surrey.

Kier is utilising modern methods of construction (MMC) throughout the build of this surgical centre, including a hybrid pre-cast concrete frame and facade, cast in service support systems, and pre-manufactured riser and corridor service modules.