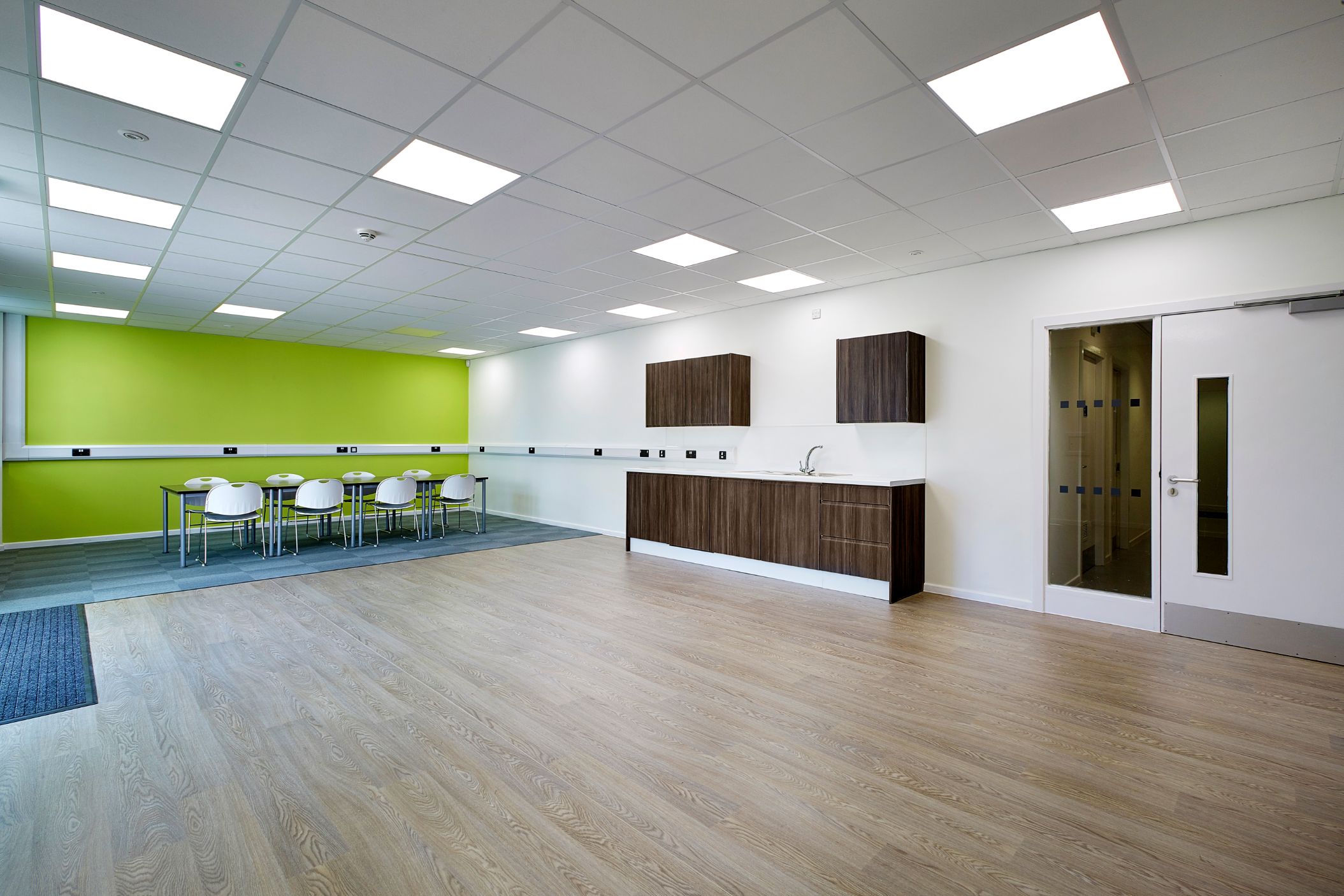 The Chase SEN, part of South Gloucestershire and Stroud College (SGS), provides a dedicated, self-contained educational resource in the Stroud Valleys. The Chase is focussed on nurturing and developing young people requiring high needs support who have a passion for learning catering, hospitality and enterprise, whilst also gaining the skills required to succeed and contribute within society.

Having completed the Stroud College Complex in 2007, we returned in 2018 as part of the Scape National Minor Works framework, to convert and regenerate an old disused engineering building into striking new modern facilities for disabled students. In addition to the mock commercial kitchen the team created a social lounge with a domestic kitchenette, lockers, soft seating area and a therapy room. 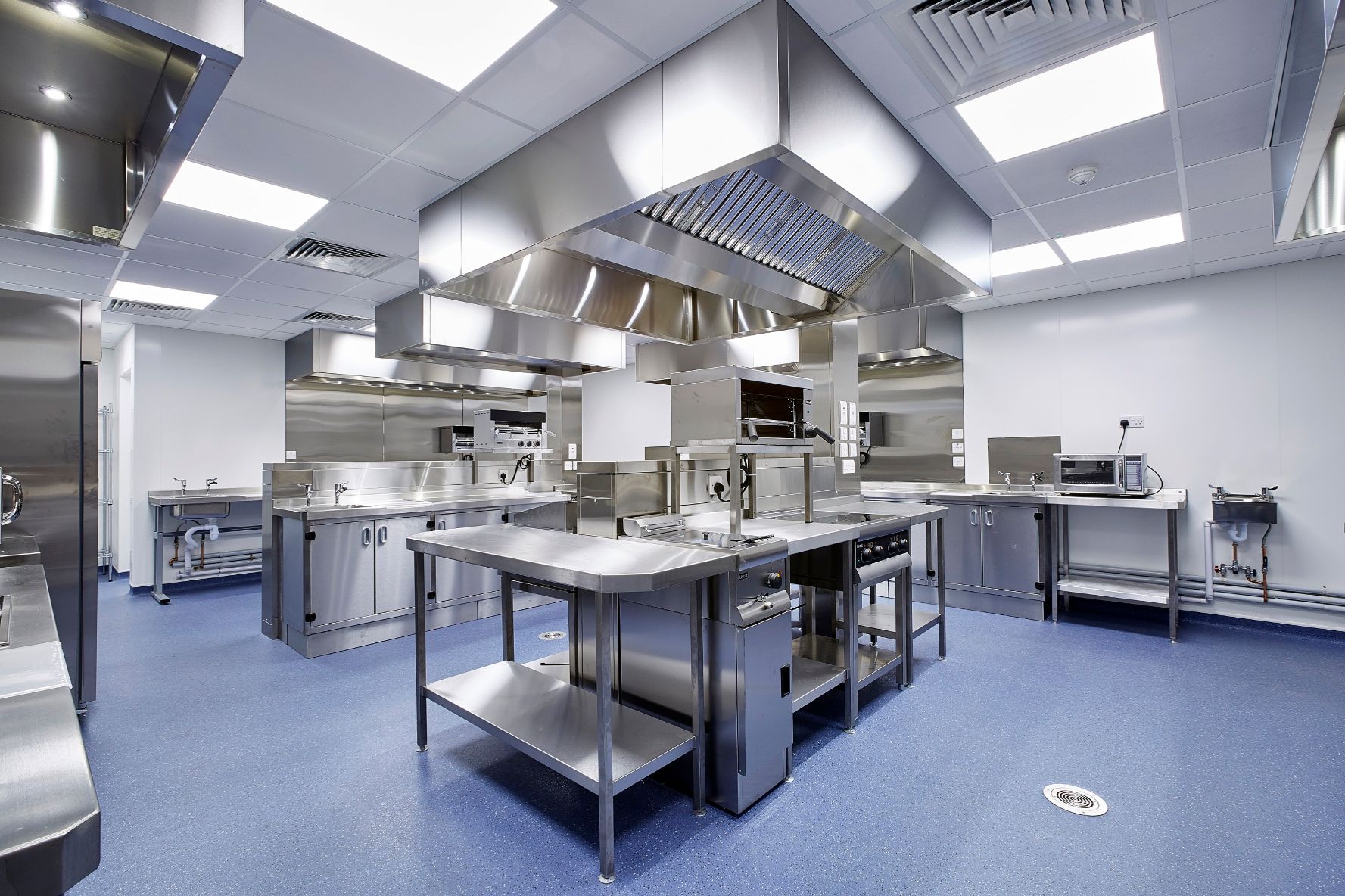 Working collaboratively with South Gloucestershire and Stroud College, we designed and fitted out an industry standard training kitchen and associated areas to create an environment where learners could develop professional skills and gain the techniques required to work in the modern hospitality and catering industry.

The kitchen is fitted to City and Guilds standards with each work station benefiting from cooking, preparation and wash-up areas. 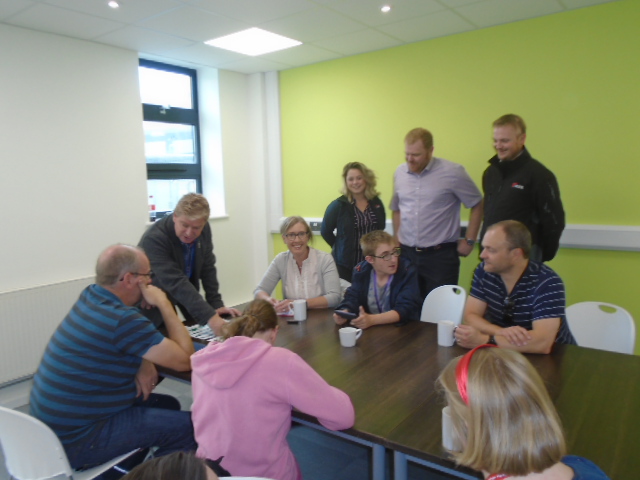 The project was carried out next door to a music recording studio, so to ensure no noise transference the team used acoustic walls. There was also a particular challenge in designing and installing new ventilation and extraction systems within the restrictions of the existing layout. ‘Crosstalk Attenuation’ was used to stop reverberation and noise transferring through the ducts and ventilation system. The sizes and placement of ductwork had to be adapted to fit the existing building, enabling fire ratings etc to be maintained.

Extensive value engineering was carried out which resulted in the team re-arranging the layout design to reuse existing walls, thus removing the expense of demolishing them; existing doors were also used. Kier worked with the designers and SGS to bring the project within budget.

Kier provided induction and training for all staff and actively engaged in ‘soft landings’ at handover. They also organised a visit for students and parents to view the new facilities. As part of their social value commitment they also donated materials to the college’s construction department for building works.

Our work at The Chase SEN has been recognised within Kier and has been awarded ‘2019 Kier Central Project of the Year’ in the under £5m category.  Contributing factors include being delivered on time and on budget and a 10/10 customer satisfaction score.

" Thanks so much for all of your hard work. The place looks amazing and the students (and staff) have been very excited about using such fabulous facilities. "

Delivering a 600 place Secondary School with 12 form of entry core facilities, as well as a 110 place SEN School and Energy Centre for Cambridge Meridian Academies Trust (CMAT) on behalf of Cambridgeshire County Council.

With Covid-19 restrictions preventing in person site visits, our virtual transition model supports pupils and teachers to familiarise themselves with their new building and access useful information to support their transition and adjustment to the new school environment.

Construction of a new £30m building for Croesyceiliog Comprehensive School, providing 1,200 school places and ensuring social value was delivered throughout the project.

Spa School Camberwell is a co-educational special school for students aged 5 to 16 with autism. Construction works included the structural alteration, internal remodelling and fit out of a three storey Victorian building with a three storey new build extension. It has the capacity for 120 students and 80 staff.

We have been appointed by East Ayrshire Council to deliver the £8.5m new build Netherthird Primary School in Cumnock. The new school will accommodate 278 pupils in nine classrooms with four supported learning spaces and a new outdoor learning zone and play area.

Design and construction of an all through SEND school, funded by the Department for Education and managed by Orchard Hill College Academy Trust. The school specialises in autism and complex needs for up to 150 pupils aged 2–19 and offers a wide variety of special learning environments including sensory/calm spaces and emotional literacy support rooms.