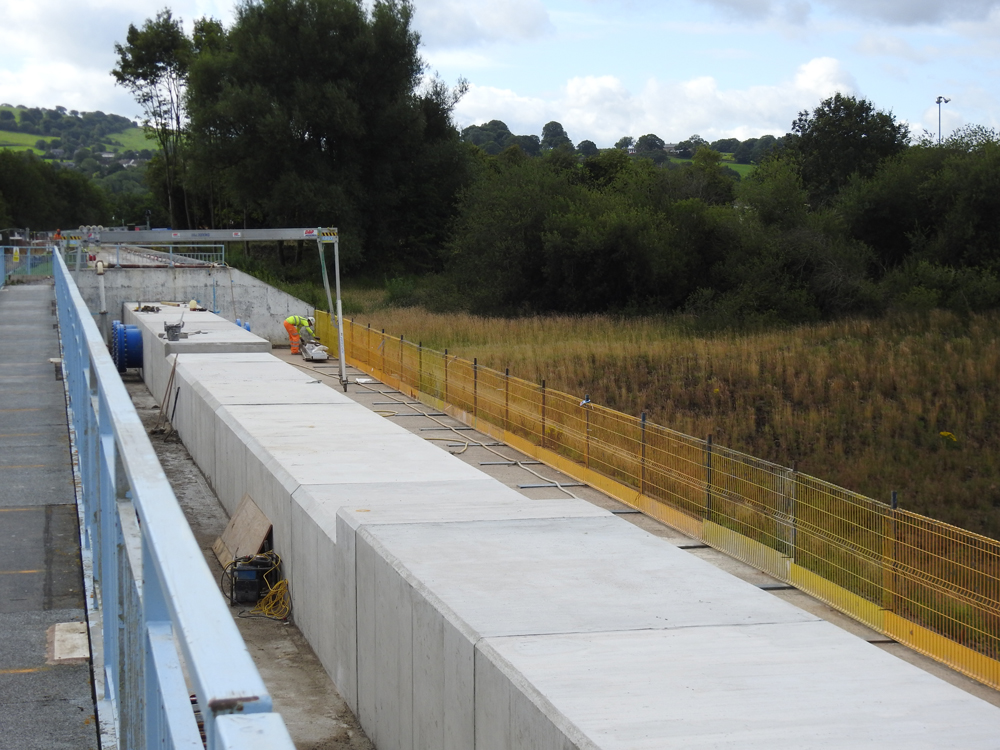 After a period of heavy rainfall, which caused widespread problems across the North West, the spillway at Toddbrook reservoir was damaged and was at risk of collapse. As part of a multi-agency response, Kier responded to an emergency call-out on 1st August 2019 under its framework with the Canal & River Trust. The challenge was to secure the integrity of the spillway and to prevent the inundation of Whaley Bridge.

A further challenge was to ensure that Kier and its suppliers and sub-contractors worked in conjunction with other outside agencies such as the Fire Service, Police and the Military.

During the course of the emergency, 1500 people were evacuated from Whaley Bridge and the surrounding area in the event that the dam failed. At the time it was hailed as the biggest evacuation of civilians in peacetime. 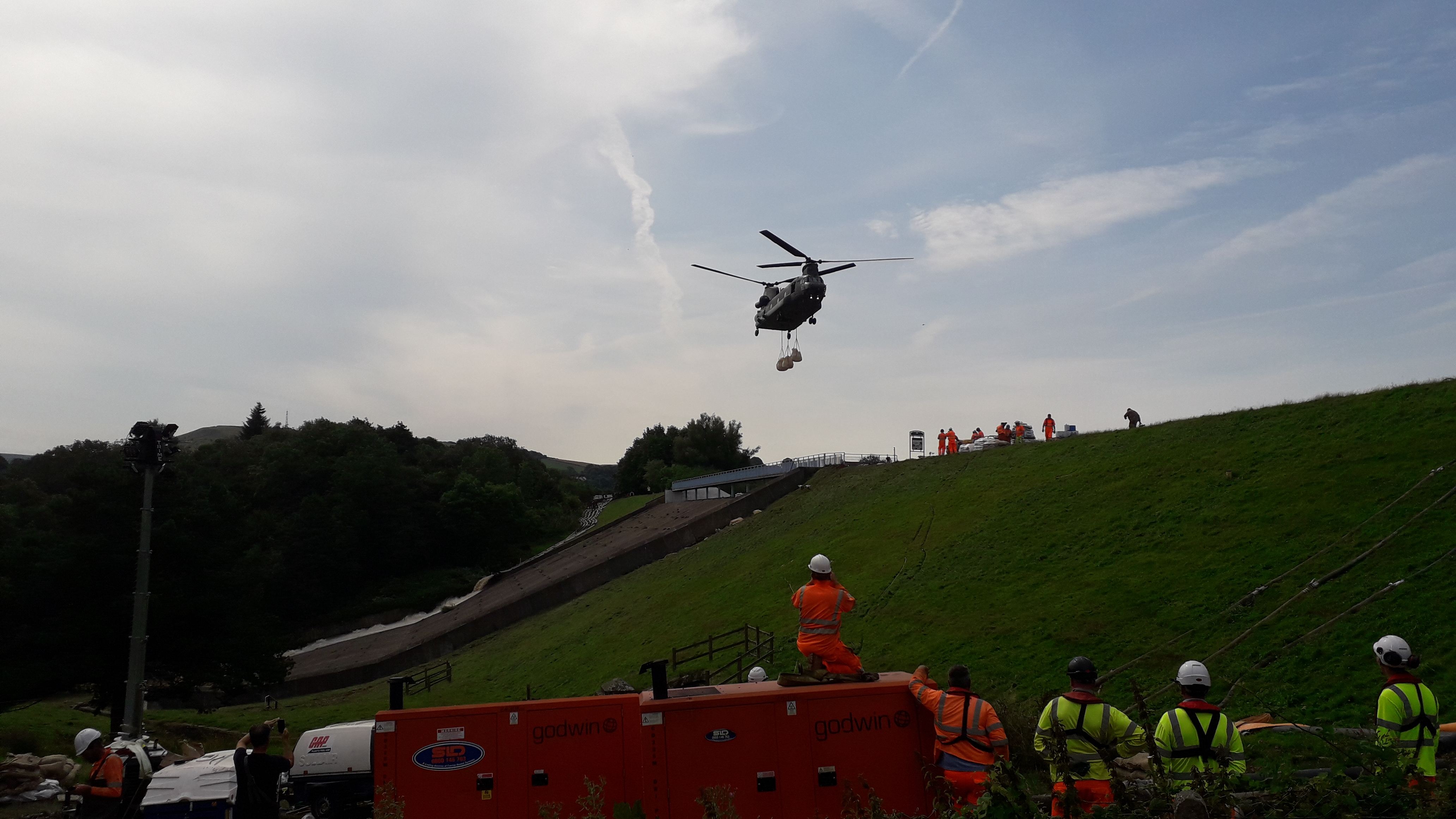 Over the course of 7 days 1 billion litres of water was pumped out of the reservoir. An RAF Chinook helicopter dropped over 500 one tonne bags of aggregate onto the damaged section of the dam and grout was poured around the bags to bind them and further strengthen the dam. Kier was mobilised by the Canal & River Trust to provide access routes to the site for the emergency services, and to mobilise and install pumps to remove the water. Kier provided coordinated with, and provided aggregate to the RAF personnel. Kier also carried out the grouting works to seal the dam.

At the same time as the works to the dam, Kier were involved in creating a temporary structure at the head of the reservoir and also worked to divert the feeds of water into the reservoir to prevent it filling back up if further weather events occurred. 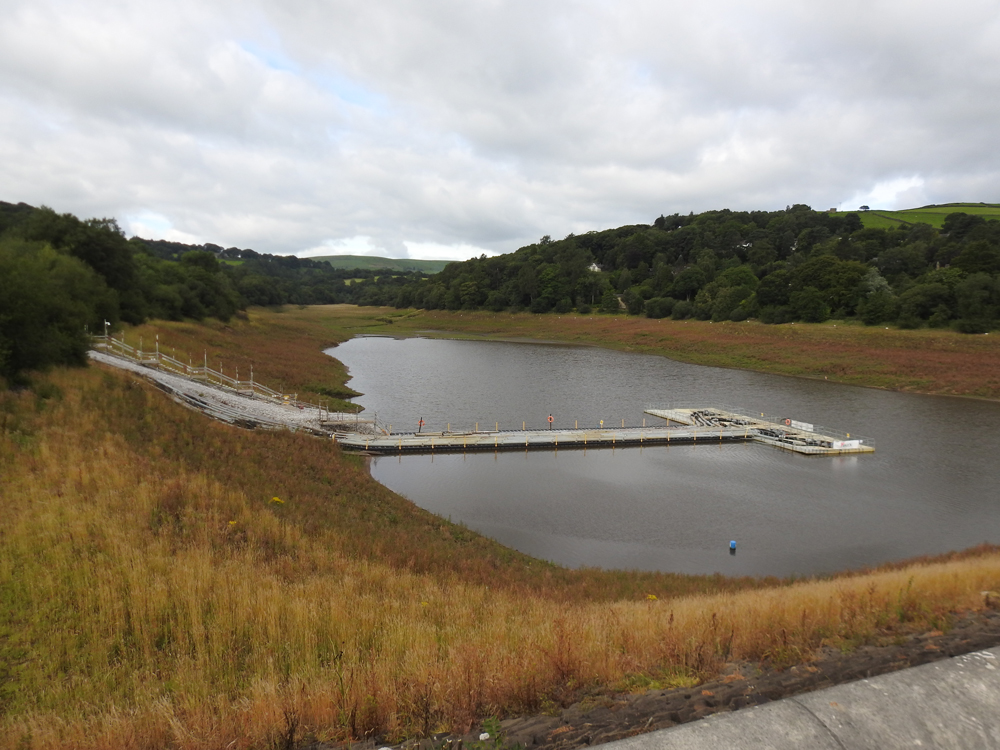 The emergency response was a complete success with the dam being saved from collapse and temporary repairs effected to ensure that the inundation of Whaley Bridge was prevented and the potential flooding and other damage caused by failure of the dam was averted.

The emergency response showed that the emergency procedures put in place by Kier and the Canal & River Trust were robust and adequate to cope with such a large incident.

It also proved that the Kier Regional Civils team was able to work effectively in conjunction with blue light and the military services successfully.

" We would like to thank Kier and its supply chain who reacted very quickly to this emergency and worked tirelessly to reduce water levels and stabilise the dam. "

" Your people have been excellent at every stage, nothing has been too much trouble. You should be very proud, you were right on the frontline saving Whaley Bridge. "

Kier worked as part of Team Van Ord (TVO) to improve the standard of protection provided to 39,741 properties in the towns and villages of Worle, Weston-Super-Mare, Kingston Seymour and Wick St Lawrence by improving the 3670m of earth bank tidal defences lining the Congresbury Yeo Estuary.

Kier worked as part of Team Van Ord (TVO) on The Steart Coastal Management Project which was the UK’s largest coastal management scheme, helping to protect homes and business from flooding due to climate change and rising sea levels.​

Kier used our marine expertise to undertake improvement works to St Mary’s Harbour on the Isles of Scilly, located within areas of national and international environmental and ecological protection.​

Rebuilding the Elland Bridge after the 19th century original was completely destroyed in the 2015 Boxing Day floods.​

Replacing eroded concrete along a 40m length of Loe Bar Outfall by spraying concrete on the front and top face of the outfall and around the inspection chamber. The works had to be completed by the end of October 2020.

The development of a CL:AIRE Materials Management Plan (MMP), enabled the use of soils, which would normally be classified as waste, from a local development site within flood banks on the Helston (River Cober) Flood Alleviation Scheme, Helston, West Cornwall.

Kier International was awarded the Dubai Harbour Infrastructure and Logistics package in 2018.